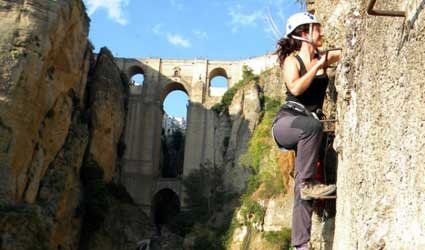 THE Serrania de Ronda has the highest number of ‘Via Ferrata’ facilities in Southern Spain.

A via ferrata (Italian for ‘iron road’) is a protected climbing route with a steel cable which is fixed to the rock at regular intervals. Climbers can secure themselves to the cable, limiting falls. Additional climbing aids, such as iron rungs, pegs, carved steps, ladders and bridges are often provided.

The tenth, which has cost €17,400, charged to the Plan to Promote Tourism Products in the Serrania de Ronda, has been opened in Sierra del Hacho recently.

It is 180 metres long and has a 32-metre-long zip-line and three suspended bridges. It is not suitable for beginners.