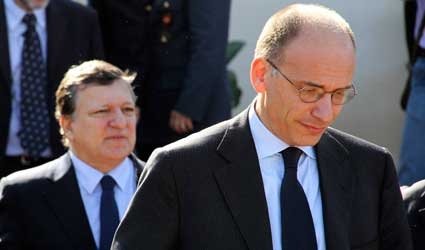 Barroso and Italian Prime Minister Enrico Letta were heckled by local residents shouting “Shame!” when they arrived on Lampedusa, prompting them to make an unplanned stop at its badly overcrowded immigration centre.

In a press conference, Barroso pledged 30 million euros (25.59 million pounds) in emergency funds that can be used to improve conditions at the immigration centre, where hundreds have been forced to sleep outside on the ground for days.

Barroso and Letta also paid their respects to the dead, standing before some 280 coffins arranged in rows. Some of them, small and white, held the corpses of children.

“The image of hundreds of coffins will never get out of my mind,” a visibly shaken Barroso said. During the same press conference, Letta announced a state funeral would be held for the victims.

The tragedy occurred when a fire broke out on board less than a kilometre from Lampedusa, creating a panic that capsized the boat, according to testimony from some of the 155 survivors. They had set out from Libya, paying hundreds of dollars for the passage.

Divers recovered nine more bodies on Wednesday, bringing the confirmed dead to 297, the coastguard said. More than 300 are estimated to have perished.

EU Home Affairs Commissioner Cecilia Malmstrom also expressed shock at the sheer number of dead, saying: “This is not the EU we want. We need to do everything we can to prevent this from happening again. It requires EU action.”

With Lampedusa just over 110 km (70 miles) from Tunisia, Italy has borne the brunt of migration from North Africa for more than a decade.

As of a week ago, about 30,100 migrants had reached Italy by sea this year, according to UN refugee agency data. Of those, 7,500 fled the Syrian civil war, 7,500 political oppression in Eritrea and 3,000 violence in Somalia.

Unlike in previous years, almost all the seaborne migrants could qualify for refugee status, in part as a result of the Arab Spring uprisings that led to political instability across the southern fringes of the Mediterranean.