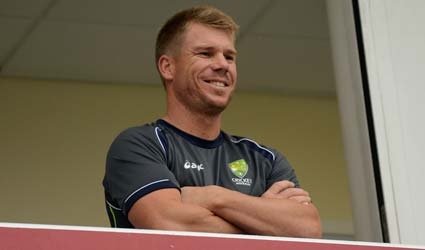 MELBOURNE (Reuters) – Australia batsman David Warner has been ordered to front up to Sydney’s suburban cricket grounds to play club-grade cricket after failing to show up for his Randwick Petersham side on the weekend.

The hotheaded 26-year-old was expected to debut for Randwick on Saturday, but pulled out, citing a need to hit the nets for some practice.

Warner, who posted a photo of himself in boxing gloves with a fitness trainer on Twitter on Saturday, was spotted the same day at a horse racing meeting at Sydney’s Randwick racecourse, according to local media reports.

Warner was hauled before Andrew Johns, chief executive of Cricket New South Wales, on Tuesday to explain the no-show.

“Cricket NSW reinforced that its expectation, as well as players’ contractual obligation, remains that individuals play grade cricket when fitness and state commitments permit,” the state governing body said in a statement on its website (www.cricketnsw.com.au).

Warner was given a suspended one-match ban, meaning he would miss either a Sheffield Shield match or a domestic one-day fixture for New South Wales for another offence, but also ordered to turn up for Randwick for the following two Saturdays, and a third if his state one-day commitments permitted.

The 22-test lefthander would also have to make two visits to other grade cricket clubs to promote a state government campaign to discourage people from drink-driving, the statement said.

Warner was left out of Australia’s limited overs squads touring India for a Twenty20 international and a seven-match one-day series starting Sunday, and his international career remains precarious after a number of disciplinary offences.

Warner was stood down after punching England batsman Joe Root at a Birmingham nightspot in the leadup to the Ashes and missed out on the first two tests.

That came three weeks after a highly-publicised Twitter rant against two Australian journalists which led to a fine and a dressing down from national governing body Cricket Australia.