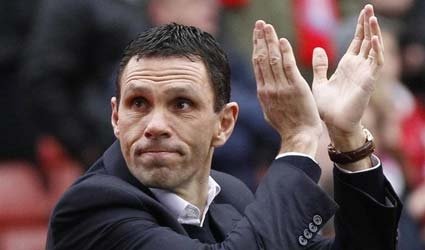 (Reuters) – Gus Poyet has been appointed Sunderland manager on a two-year-contract, the Premier League club said on Tuesday.

The former international midfielder, who played for Chelsea and Tottenham Hotspur, was sacked by Championship side Brighton and Hove Albion in June for an undisclosed breach of club discipline.

“We analysed a wide range of candidates and believe that Gus’s track record, experience, commitment and passion make him the right man to take us forward,” Sunderland chairman Ellis Short said in a statement on the club’s website (www.safc.com).

Poyet, 45, has been tasked with ensuring Sunderland’s Premier League survival after a dreadful start to the season during which they have managed only one point from their first seven matches.

Kevin Ball took temporary charge after Di Canio’s dismissal, and Sunderland beat third-tier Peterborough United in the League Cup but lost to Liverpool and Manchester United in the league.

Di Canio was brought in by Sunderland in March to replace Martin O’Neill when the club looked almost certainties for relegation.

He managed to keep Sunderland in the Premier League but the side won only three of his 13 matches in charge.

British media said the Sunderland players were unhappy with Di Canio’s abrasive management style and public criticism of them but the Italian denied reports of a training ground bust-up following defeat to West Brom.

Poyet was an early favourite for the role, despite his acrimonious parting with Brighton, whom he led to the Championship (second tier) playoffs.

He was suspended following the playoff semi-final defeat to Crystal Palace in May, and found out he had been fired as manager while working as a pundit on live television.

He will bring Mauricio Taricco and Charlie Oatway to Sunderland as part of his backroom staff, with his first match in charge against Swansea City on October 19.