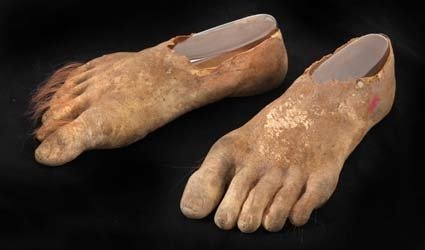 Fans of Peter Jackson’s epic fantasy film series “The Lord of the Rings” will have the opportunity to bid on rare movie memorabilia, a Beverly Hills auction house said on Monday.

Props from Jackson’s “Lord of the Rings” trilogy will be up for sale at Julien’s Auctions on December 5, including a pair of prosthetic hairy Hobbit feet worn by one of the film’s main characters, Samwise Gamgee. The hairy feet are estimated to fetch between $15,000 (9,320 pounds) and $30,000.

“It has been more than a decade since the first of the trilogy films was released and in that time only a handful of items from these films have ever been publicly offered for sale,” Martin Nolan, executive director of Julien’s Auctions, said in a statement.

“Demand for this memorabilia is extraordinarily high and the scale and quality of this remarkable collection is truly a once in a lifetime opportunity for fans and collectors,” he added.

The total auction is expecting to fetch between $1 million and $1.5 million from the sale of 80 lots of memorabilia.

Other highlights from the fantasy realm of Middle Earth include the sword of lead character Frodo Baggins, played by Elijah Wood, estimated between $100,000 and $200,000, and a wizard staff belonging to Gandalf the White (played by Ian McKellan), expected to fetch between $50,000 and $70,000.

The auction house said that the rare props come from the private collection of one collector, and is the second largest collection of “Lord of the Rings” movie memorabilia, behind only Jackson’s own official archive of props.

The story follows the journey of mild-mannered hobbit Frodo, who travels across the treacherous terrains of Middle Earth to destroy a precious ring that would make its wearer dangerously powerful.

The films grossed nearly $4 billion at the worldwide box office, one of the largest-grossing film series in history.

Jackson adapted Tolkein’s prequel “The Hobbit” into a second trilogy of films set in Middle Earth. “The Hobbit: An Unexpected Journey” was released last year and has grossed more than $1 billion at the worldwide box office.

The second instalment, “The Desolation of Smaug,” is set to be released in U.S. theatres on December 13.