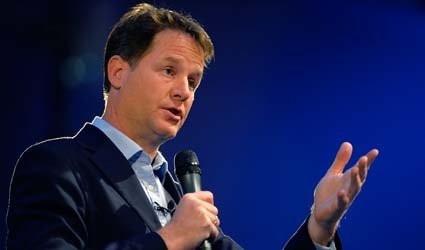 LONDON (Reuters) – Prime Minister David Cameron’s promise to reform Britain’s relations with the European Union is an ill-fated attempt to unite his party that could lead to the “economic suicide” of withdrawal from the bloc, his deputy will say on Tuesday.

Nick Clegg, leader of the Lib Dems, the pro-EU party that shares power with Cameron’s larger Conservatives, will accuse the prime minister of starting a chain reaction that could lead to Britain tumbling out of the EU.

Intensifying the rhetoric on an issue that divides the coalition and threatens Cameron’s chances of re-election in 2015, Clegg will say the EU policy is bound to unravel and will never appease Conservative Eurosceptics.

“It is a short-sighted political calculation that could jeopardise the long-term national interest,” Clegg will say, according to a copy of his speech released in advance by his office. “It is playing with fire and, if we go down this track, it is Britain that will get burned.”

Cameron upset European allies in January when he promised to negotiate a new EU deal for Britain and hold a referendum on EU membership by the end of 2017.


His rivals said it was a gamble forced on him by Conservative splits over Europe and the rise of the UK Independence Party, which wants to leave the EU.

Clegg, whose popularity and that of his party has slumped since the coalition was formed in 2010, will criticise those in Britain who see Europe as a “sinister super-bureaucracy”.

Opponents of the EU see it as a threat to Britain’s sovereignty and argue that London would save billions in membership fees and be free to forge new trade links if it left.

Clegg will argue that leaving Britain’s biggest trading partner would wreck the economic recovery. Membership of the 28-nation bloc gives Britain access to a single market of 500 million people and more than 50 trade deals around the world.

It also helps to attract investment from non-EU countries that see Britain as a springboard to Europe, Clegg will say.

And he will call on organisations that want to stay in Europe to make their case more forcefully: “Leaving the EU would be economic suicide. (It) would throw our recovery away.”

Clegg, who once described the pledge to repatriate powers as a “false promise wrapped up in a Union Jack”, will cede some ground to Cameron, accepting that Britain should be able to “cobble together a package of reforms” with Germany and others.

However, Clegg will say no deal would ever be enough to persuade Conservative Eurosceptics to embrace the club that Britain joined in 1973.

BA threatens 19,000 staff with the Sack unless they agree to new conditions