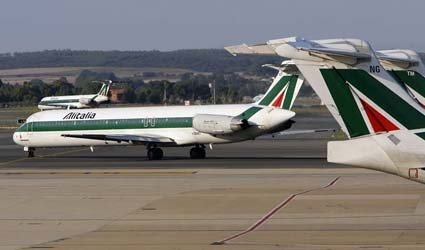 ROME (Reuters) – Troubled Italian airline Alitalia risks having to file for bankruptcy if no deal on a proposed capital increase is reached in a couple of weeks, a government source said on Tuesday.

Alitalia’s shareholders will vote on a capital increase of at least 100 million euros (84.6 million pounds) on October 14 to help keep the company afloat.

“Alitalia risks filing for bankruptcy if no solution on the capital increase is found in a couple of weeks,” the government source told Reuters.

Alitalia needs around 500 million euros to keep going and to be able to invest in a new turnaround strategy, analysts have said, after accumulating losses of over 1 billion euros since being privatised in 2009.

Air France-KLM owns a 25 percent stake in the carrier.