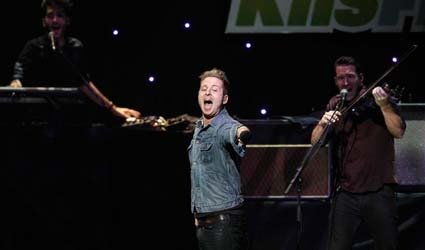 LONDON (Reuters) – U.S. rock band OneRepublic snatched the top spot in the British singles chart on Sunday, edging out The Vamps in the closest race for the number one position seen all year, the Official Charts Company said on Sunday.

A late surge for OneRepublic’s ‘Counting Stars’ helped them outsell new entry ‘Can We Dance’ from British band The Vamps by just 1,150 copies to reach the pinnacle of the charts for the first time.

In the album chart, Californian sister-act Haim also benefited from strong sales in the second half of the week to see off a challenge from Justin Timberlake and enter the chart at number one with their debut album ‘Days Are Gone’.

Timberlake’s new entry ‘The 20/20 Experience – 2 of 2’ pushed former number one albums from the Kings of Leon and the Arctic Monkeys into third and fourth place respectively.