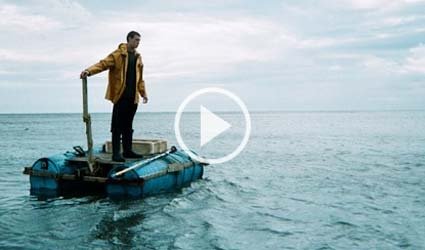 LONDON (Reuters) – British director Paul Wright’s new film “For Those in Peril” pans across a dour Scottish coastal town where madness, tragedy and a feared sea monster lurk close beneath the surface.

It’s a dark tale, typical of a new generation of filmmakers like this year’s Oscar hopeful Steve McQueen, who are taking Britain’s tradition of gritty “kitchen sink” cinema in a stark and sometimes strange direction.

British actors and talent are a familiar sight at the Oscars and on big Hollywood movies, but more artistically challenging, homegrown projects have generally struggled to make waves, even in more accessible European markets.

That is changing, with a rash of new works a world away from mainstream cinema’s depiction of affluent, London-centric life, typified by Hugh Grant and Richard Curtis’s romantic comedies “Four Weddings and a Funeral” and “Notting Hill”.

McQueen, who debuted with his story of the 1970s Northern Irish prison hunger strikes “Hunger”, and contemporaries like Shane Meadows, Ben Wheatley and Lynne Ramsay have a very different take on life in the United Kingdom.

Wright’s hero Aaron, the only survivor of a fishing accident that drowns five young men off Scotland, is steadily alienated and brutalised by the rest of his small village.

Desperate, guilty and unable to remember the accident, he becomes convinced his brother and the other dead were swallowed by a sea monster.

Like Scottish-born Ramsay’s “We Need To Talk About Kevin”, or Wheatley’s 2011 horror movie “Kill List”, Wright gives a tale that might sound ludicrous or extreme roots with his realistic evocation of the setting – in his case Scotland’s cold, austere and Presbyterian east coast.

“It could have been the Disney equivalent. The guy who believes there’s a monster out in the ocean, a cutesy version,” said Wright, 32, who grew up in a small fishing village in Fife, north of Edinburgh.


“But by setting it out in the real world, the extremes become more vivid. Anything out with that world does feel all the more shocking. We were looking to explore the contrasts,” he told Reuters ahead of the release of his feature this week.

The newcomers revel in the realistic detail of Britain’s “kitchen sink” films – a tradition rooted in classics like the 1960 tale of a factory machinist “Saturday Night and Sunday Morning” and more recently Ken Loach’s Scotland-based drama “My Name Is Joe”.

But the drift into fantasy breaks that tradition.

Wheatley’s “Kill List” kicks off with a suburban dinner party and ends in scenes of excruciating, occult horror. His “A Field in England”, released earlier this year, mixes magic mushrooms with England’s 17th-century civil war.

“If they start to believe that they’re in a world that’s documentary and real when those things come along, they don’t question them as much as if it starts off really stylised.”

Like McQueen, a visual artist whose “12 Years a Slave” is seen by critics as a leading contender for this year’s Best Picture Oscar, Wright’s film is influenced more by a combination of visual and audio impulses than by other films.

“It was a lot more photography we were using for direct references for scenes, rather than one or two particular films,” Wright said. “We had a scrapbook of a thousand images that individually weren’t direct references but together were the mood of the piece.”

Having moved back to Scotland from London, Wright faces a dilemma next year in Scotland’s vote on whether to break away formally from the United Kingdom after receiving substantial funding from the British film industry.

“It’s quite a good time just now. I’ve always liked Scottish film but there’s a lot of different voices now which I think is a healthy thing.”