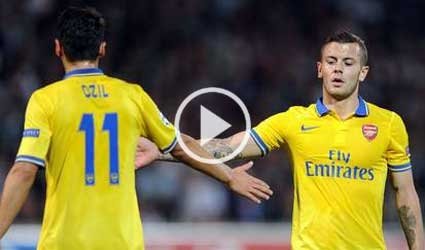 (Reuters) – Arsenal returned to the top of the Premier League on Sunday after Jack Wilshere rescued a point for them in a 1-1 draw at West Bromwich Albion, while rivals Tottenham Hotspur suffered a shock 3-0 thumping by West Ham United.

Chelsea relied on two goals in two minutes by substitutes Eden Hazard and Willian late in their match at Norwich City to give them a 3-1 win that lifted them to third in the league with 14 points from seven games, two behind Arsenal and Liverpool.

A week after stunning champions Manchester United 2-1 at Old Trafford, West Brom were up to their old tricks against visitors Arsenal as they took a 42nd-minute lead with Claudio Yacob’s powerful downward header.

After somehow escaping further damage from more West Brom chances, Arsenal drew level in the 63rd minute when Jack Wilshere made up for his poor performance until that point when he smashed in a deflected shot from 20 metres out.

The point, which put Arsenal ahead of Liverpool on goals scored, will be all the sweeter for Arsene Wenger’s side on a day their bitter north London rivals Tottenham lost ground on the leaders after a mauling by West Ham at White Hart Lane.

Second-half goals from Winston Reid, Ricardo Vaz Te and Ravel Morrison, whose was a superb individual effort after picking the ball up in his own half, secured only a second league victory of the season for Sam Allardyce’s side.

Earlier in the day, Chelsea had grabbed three points at Norwich after it had looked like their fourth-minute lead from an Oscar goal would not be enough as Anthony Pilkington levelled for the hosts in the 68th minute.

The equaliser seemed to shake Chelsea awake and the introduction of Hazard and Willian changed everything.

Chelsea broke quickly after a Norwich corner and Hazard’s shot was pounced on by John Ruddy but the ball carried on past the keeper and over the line in almost slow motion on 85 minutes.

Another counter-attack wrapped up the win a minute later as Willian curled in a first-time shot of the kind of class the club will have been hoping for from the 30 million pounds they paid for him in the close season.

The only black cloud for Chelsea, and possibly for England ahead of their World Cup qualifiers on October 11 and October 15, was the sight of left back Ashley Cole being substituted in the second half with what looked like a rib injury.

They are level on 14 points with Chelsea, with Manchester City and Spurs a point behind. Champions Manchester United are ninth with 10 points.