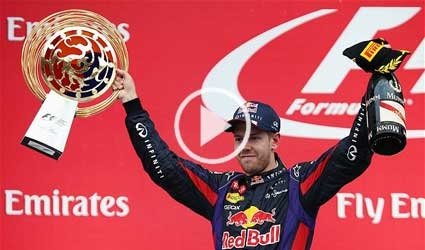 YEONGAM, South Korea (Reuters) – Red Bull’s Sebastian Vettel won the Korean Grand Prix on Sunday to chalk up his fourth victory in a row and stretch his championship lead to 77 points with five rounds remaining.

It was Vettel’s third successive Korean win, eighth triumph of the season and 34th of his career.

Finland’s Kimi Raikkonen finished second, ahead of Lotus team mate Romain Grosjean, in a race marked by two safety car periods and the unexpected appearance of a fire marshals’ Jeep on the track.

Ferrari’s Fernando Alonso, Vettel’s closest challenger, could manage only sixth place on an overcast afternoon that threatened rain without delivering.