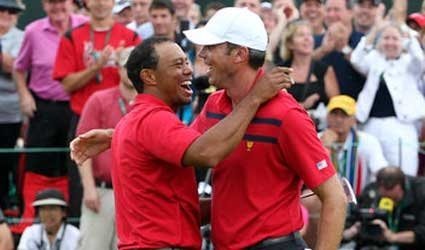 With the Americans needing a total of 18 points to retain the trophy, Woods secured the decisive point by safely parring the final hole of his singles match.

The world number one, despite visibly suffering from back pain over the closing holes, came from one down after eight holes to seal a one-up win that gave the U.S. an unassailable lead with two singles matches still to finish.

“It feels good. It was a team effort this whole week,” Woods said. “We really played well, and gave ourselves a really nice lead going into the singles.

“And it was a tough day, tough conditions, rain, wind. It was tough all around. It was a long week but it was worth it. We did it.”

The U.S. had needed only four points from Sunday’s 12 singles encounters to keep the Cup, having established a lead of 14-8 earlier in the day after dominating the rain-delayed final foursomes session.

However, they had to work a lot harder than expected as the Internationals mounted a gutsy fightback, winning seven and a half of the matches.

Looking for a fast start from the top of their singles lineup, the Americans secured their first win of the afternoon when Hunter Mahan beat Japan’s Hideki Matsuyama 3&2 in the opening encounter.

“I always like being first out, I don’t know why, just a comfort thing,” said Mahan. “You can’t give them momentum, because they have so many good players that they can run off five, six wins in a row.

“To get off to a good start, be up a couple (up) after nine was huge. Made that birdie on 10, felt like I was in control of myself and swung great from there.”

Australian Jason Day had won the first point of the singles, crushing Brandt Snedeker 6&4, but the Internationals were still six points behind.

Zach Johnson wrapped up a comfortable 4&2 win over South African Branden Grace to put the U.S. ahead 17-10 before Masters champion Adam Scott put another blue number on the board for the Internationals with a 2&1 win over Bill Haas.

South African Ernie Els scraped past Steve Stricker one-up and Australian Marc Leishman sank a 14-footer from the fringe to par the last and beat Matt Kuchar by the same margin.

Former Masters champion Charl Schwartzel of South Africa came from one down after 13 holes to beat Keegan Bradley 2&1 and keep the Americans waiting even longer for that elusive 18th point.

However Woods, who had won three matches out of four in partnership with Kuchar earlier in the week, delivered for his team as he split the fairway off the tee on 18, then struck an accurate approach to 30 feet.

He narrowly missed his birdie putt but Sterne conceded the par to Woods and the overall victory to the U.S., before the last two pairings finished off.