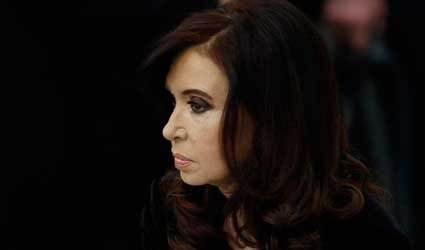 BUENOS AIRES (Reuters) – Argentine President Cristina Fernandez has been told by doctors to take a month off because of a subdural hematoma on her brain, forcing her to abandon campaigning for important congressional elections taking place later this month.

The 60-year-old president suffered trauma to the brain in August and had been given the all-clear at the time, her spokesman Alfredo Scoccimarro said, without elaborating.

Vice President Amado Boudou cut short a journey to France to return to Argentina and take over the president’s duties.

Fernandez was in full campaign swing for congressional elections on October 27. Recent polls have indicated the government could lose control of Congress, an outcome that would deprive Fernandez of the chance of introducing a constitutional reform that would allow her to run for a third term in 2015.

Re-elected to a second term in 2011 on promises of increasing the government’s role in the economy, Fernandez has said she is not thinking about a possible third term. But talk persists that her supporters want the constitution amended to let her run again.

Fernandez was admitted for checks earlier on Saturday to a Buenos Aires hospital that specializes in cardiovascular problems.

Doctors found a subdural hematoma, the accumulation of blood under a membrane that covers the brain. It usually occurs after a blow to the head.

The decision to discharge her suggests the hematoma is too small to be drained via surgery and is low risk, according to medical sources not involved in the treatment.

Politicians from various parties tweeted their wishes for a speedy recovery.

Fernandez, president of the South American country since 2007, had her thyroid glands removed last year after she was diagnosed with cancer, although later tests indicated no cancer was present.

Her late husband, former President Nestor Kirchner, died after a heart attack in 2010.