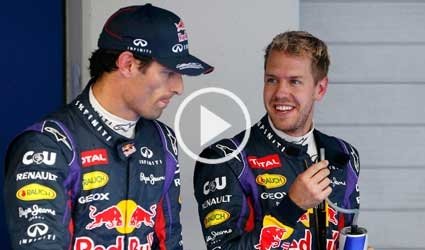 Vettel, who chalked up his third pole position in a row, will have the Mercedes of 2008 champion Lewis Hamilton to keep him company on the front row of the grid for Sunday’s race but the German’s car was once again comfortably the fastest.

He is 60 points clear of Ferrari’s Alonso in the standings, with five races to go after Yeongam, and is chasing his fourth consecutive win.

Alonso would have been even further down the grid had Australian Mark Webber, Vettel’s team mate, not collected a 10 place penalty for taking a post-race ‘taxi ride’ on the Spaniard’s car in Singapore two weeks ago.

Webber, who was on pole in Korea last year, qualified third but will start outside the top 10 with even more of a mountain to climb than Alonso.

“I think it was fairly close. We had a very good lap on my first attempt. I knew it would be tricky for me to beat that time,” Vettel said after celebrating his 42nd career pole.

“As expected Merc was very strong. It’s a tight battle … we have got the balance right this weekend and I improved the car from yesterday as I was not entirely happy after practice.”

Qualifying conditions were cooler than in practice, although Vettel was also quickest in the final session on Saturday morning, and Sunday could see some rain although the threat of a typhoon has receded.

“I don’t mind, it’s not a disaster if it starts to rain, we have rain tyres in the garage,” said the 26-year-old.

“When I arrived on Wednesday, it was very windy but it has died down since then and I think the typhoon has changed direction.”

Vettel and Alonso are the only drivers to have won in Korea since the race made its debut in 2010 and Red Bull’s triple champion is chasing his hat-trick at Yeongam.

Alonso has made storming starts his trademark this season but will have both Mercedes drivers ahead of him with Nico Rosberg lining up in fourth place and Lotus’s Romain Grosjean in third.

“We got the most out of the car. It has been a good qualifying for us and hopefully tomorrow we will be able to fight with them (Red Bull)” said Hamilton. “There’s threats all around but I’m just looking forward.”

Good news – Unemployment in Andalucia fell by 1.13% in November