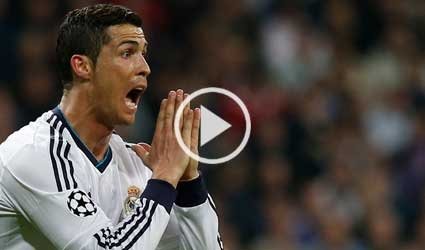 MIAMI (Reuters) – Real Madrid football star Cristiano Ronaldo is appealing to Florida officials to drop charges against an over-enthusiastic fan who was arrested during a match after rushing the field to embrace him.

Ronaldo, one of the world’s highest-paid athletes handled the incident calmly during a match in Miami in August, even chatting with the 19-year-old fan, and telling security officials to take it easy on him before he was carted away.

The Portuguese striker is now asking prosecutors to drop charges against Ronald Gjoka, a Canadian student who faces two counts of disorderly conduct and trespassing as a result of the incident in front of 70,000 fans during an International Champions Cup match in Miami between Real Madrid and Chelsea.

“I was playing at Sun Life Stadium last month when a fan entered the field,” Ronaldo wrote in a hand-signed letter sent to the prosecutor.

“We hugged, and we spoke for a while, until security arrived to escort him off the field. He was not aggressive or violent in ANY way,” he went on, before explaining his concern that Gjoka could face immigration problems if the misdemeanour charges are not dismissed.

“I understand your position and the importance of enforcing rules and laws. However, I respectfully request that you and your office reconsider this decision and dismiss the two criminal charges this young man faces,” he added.

Gjoka, who attends Palm Beach State Community College, spent a night and most of the next day in jail after the hug.

The letter was sent from Ronaldo’s attorneys in Portugal after Gjoka’s attorney, Richard Hujber of Boynton Beach, contacted them a few weeks after the incident.

Gjoka is a longtime Ronaldo fan and was wearing a No. 7 Ronaldo shirt when he ran onto the field after his 28-year-old idol scored two goals.


“He made my day. I grew up fatherless and I have looked up to Ronaldo all my life,” Gjoka told Reuters. “My adrenalin was running. I just said to myself ‘go for it. See if you can jump the barrier and give him a hug.'”

Gjoka ran across the field and did a knee-slide, imitating Ronaldo’s traditional goal-scoring celebration. “I stood up and he greeted me and I told him ‘Ronaldo, thank you for making my life complete.'”

The crowd sensed Ronaldo was not perturbed by the incident and cheered during the hug, which lasted almost a minute as the pair chatted.

Hujber said Gjoka, who had never been arrested before, realizes he made a mistake, but believes he has paid a big enough penalty already after ending up in jail.

Hujber was hoping to get the charges dropped during a court hearing September 9. “Unfortunately they haven’t at this point been willing to consider that,” he said.

“Although Mr. Ronaldo’s letter is very nice, it probably has no bearing on the case because it is Sun Life Stadium that is the victim in this case and they are the entity pressing charges,” said Terry Gonzalez-Chavez, a spokeswoman for the state attorney’s office in Miami.

“Generally speaking, these laws are in place to protect the safety of the participants, coaches and sideline personnel by discouraging fans from running onto the field during the course of games.”