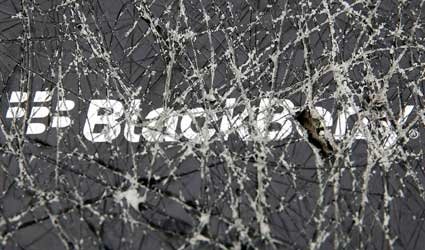 NEW YORK/SAN FRANCISCO (Reuters) – BlackBerry Ltd, on the block as its smartphone business struggles, is in talks with Cisco Systems, Google Inc and SAP about selling them all or parts of itself, several sources close to the matter said.

Such a deal would be an alternative to the preliminary agreement reached weeks ago with a group, led by BlackBerry’s biggest shareholder, Fairfax Financial Holdings, to take the company private for about $4.7 billion (2.93 billion pounds), a bid which has faced some scepticism because of financing questions.

The company, based in Waterloo, Ontario, has asked for preliminary expressions of interest from potential strategic buyers, which also include Intel Corp and Asian companies LG and Samsung, by early next week.

It is unclear which parties will bid, if any. But the potential technology buyers have been especially interested in BlackBerry’s secure server network and patent portfolio, although doubts about the assets’ value remain an issue, the sources said.

Possible bidders are proceeding with caution given the uncertainty around BlackBerry, which last month reported a quarterly loss of nearly $1 billion after taking a writedown on unsold Z10 phones.

The value of BlackBerry’s patent portfolio and licensing agreements is likely to halve in the next 18 months, a company filing from this week shows, potentially limiting its attractiveness.

According to analysts, BlackBerry’s assets include a shrinking yet well-regarded services business that powers its security-focused messaging system, worth $3 billion to $4.5 billion; a collection of patents that could be worth $2 billion to $3 billion; and $3.1 billion in cash and investments.

Adding to the company’s woes, it’s likely to burn through almost $2 billion of its cash pile in the next year and a half, Bernstein analyst Pierre Ferragu wrote on Thursday after studying the filing.

Private equity firms that have showed interest in BlackBerry – which also include Cerberus Capital Management – have asked the company and its advisers to provide additional financial details about its various business segments, two of the sources said. That process could take another few weeks, as BlackBerry focuses on taking bids from industry peers, the sources said.

In August, the company said it was weighing its options, which could include an outright sale, after Reuters first reported BlackBerry’s board was warming up to the possibility of going private.

At that time, it formed a five-member special committee chaired by board director Timothy Dattels. Other members include Chairman Barbara Stymiest, Chief Executive Thorsten Heins, Richard Lynch and Bert Nordberg.

A spokesman for BlackBerry said in an emailed statement to Reuters: “The special committee, with the assistance of BlackBerry’s independent financial and legal advisors, is conducting a robust and thorough review of strategic alternatives.” He declined to provide further comment.