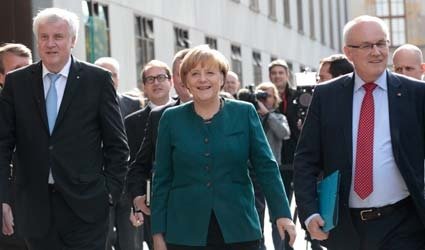 BERLIN (Reuters) – German Chancellor Angela Merkel holds preliminary talks with the Social Democrats (SPD) on Friday to sound out the chances of forming a “grand coalition” government, marking the start of complicated horse-trading that could last two months or more.

The SPD is considered the most likely coalition partner for Merkel’s conservatives but has warned it will not be rushed into a deal. Merkel will also hold preliminary talks with the Greens next week, playing potential partners off against each other.

At stake is whether the two mainstream parties can agree on tax measures, a minimum wage and infrastructure investment to rebalance Europe’s biggest economy, and form a government with broad enough public backing to tackle the euro zone’s banking and debt problems.

The SPD will have to drive a hard bargain to make any deal palatable to its members, many of whom oppose another ‘grand coalition’ because the party slumped to its worst post-war result in 2009 after hooking up with Merkel in her first term.

The talks, due to start at 1100 GMT, will examine whether policy compromises are feasible. Party leaders will make statements afterwards, probably in the evening.

Their comments will give an early indication of how doable a grand coalition is. While they are not expected to say anything substantial on policy, they could announce further rounds of exploratory talks.

The two parties disagree on key areas such as taxation, wages and investment. While the SPD campaigned for higher taxes on the rich, the conservatives ruled out increasing any taxes, but they could compromise by agreeing to crack down on tax evasion and closing loopholes for big corporations.

The social democrats are expected to make introducing a national minimum wage a condition for a coalition. Merkel prefers “wage floors” agreed by region or sector but she may have to accept a blanket minimum to get a deal, perhaps not as high as the 8.50 euros ($11.60) an hour the SPD wants.

The two parties may also agree on ramping up public investment in transport, energy and communications networks – an SPD demand – and on curbing costly renewable energy subsidies.

SPD chairman Sigmar Gabriel said attention to detail was more important than speed. “But the parties should also not play games and wilfully delay negotiations,” he told the Sueddeutsche Zeitung newspaper.

European partners are watching the political manoeuvring in Berlin closely, concerned that delay could push back EU-wide decisions on financial crisis-fighting measures such as an ambitious plan for a banking union. German agreement is essential to create a pan-European mechanism to recapitalise or wind down troubled banks, with a joint financial backstop.

Speaking in Stuttgart ahead of the talks, Merkel said the world was watching and she would hold “fair talks” to justify voters’ trust in her conservatives, who won the most seats in a September 22 general election but fell just short of an absolute majority and therefore need a coalition partner.

Once Friday’s preliminary discussions are completed, a body of 200 senior SPD officials must decide whether to give the green light for formal coalition negotiations.

“It is still an open question whether or not it will come to formal coalition talks,” said Andrea Nahles, left-wing general secretary of the SPD, who has said it could take until December or January for a government to be formed.

Political risk analyst Carsten Nickel at Teneo Intelligence said such talk was tactical posturing and he expected a deal sooner, noting that “a prolonged period of partisan bickering would not pay off with Germany’s stability-prone electorate”.

No party would want to risk exacerbating the euro zone crisis, he said, adding that while Merkel’s cabinet would act as a caretaker, “where possible, however, the preference will be to postpone decisions until a new government is in place”.

The aim of formal coalition talks would be to draft a policy blueprint as well as allocating top cabinet posts.

The SPD has said it will then have to poll its 472,000 grassroots members for their approval before entering an alliance with Merkel. That raises the pressure on her to compromise, but also poses a risk to SPD leaders, who may have to step down if members reject a coalition deal.