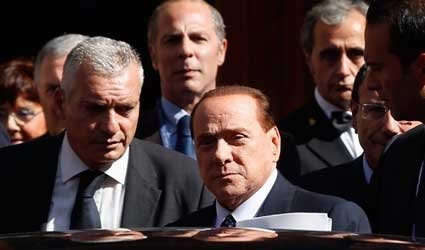 ROME (Reuters) – An Italian Senate committee is likely to start a process on Friday to expel Silvio Berlusconi from parliament following his conviction for tax fraud, meaning the former prime minister’s fate could be sealed within weeks.

Berlusconi, who has dominated Italian politics for two decades, brushed off suggestions that his parliamentary career might soon be over after the conviction and an aborted attempt to topple the government.

“I think this is the result of a well constructed plan to remove the leader of the centre-right,” said the 77-year-old billionaire. “This is a political sentence, based on nothing at all.”

Berlusconi is not expected to attend Friday’s hearing, which opens at 9.30 am (0730 GMT) and is likely to finish the same day. If the committee, which is dominated by Berlusconi’s adversaries, votes to strip him of his Senate seat, the judgment will have to be confirmed by a full vote of the upper house, around two weeks later.

The hearing follows a revolt within Berlusconi’s People of Freedom (PDL) party that forced him into a humiliating climbdown on Wednesday, when he had to back centre-left Prime Minister Enrico Letta in a confidence vote a few days after he had pulled his ministers out of the ruling coalition.

Undaunted, Berlusconi jokingly shrugged off the prospect of political retirement. “I wish! It would mean I could rest a bit,” he told reporters on Thursday.

His opponents regard the move against Letta’s coalition of the left and right as a ploy to disrupt the Senate proceedings, saying its failure was a devastating blow to his credibility.

Berlusconi’s political future has been under threat since early August when Italy’s top court rejected a final appeal and found him guilty of a massive tax fraud scheme at his Mediaset television empire.

It sentenced him to four years in prison, commuted to one year under house arrest or in community service, making him ineligible for parliament under a law passed last year.

Hard core Berlusconi supporters insist this law should not apply in his case because the offences for which he was sentenced occurred before it was passed.

But he will encounter little sympathy from the centre-left Democratic Party following his attempt to bring down Letta and it appears certain that both the committee and the full Senate will vote against him.