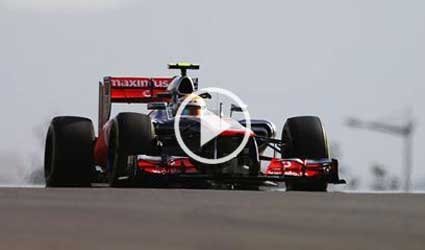 YEONGAM, South Korea (Reuters) – Lewis Hamilton kept championship leader Sebastian Vettel off the top of the timesheets in both Friday practice sessions for the Korean Formula One Grand Prix while Kimi Raikkonen slammed his Lotus into a tyre wall.

The Mercedes driver lapped the anti-clockwise Yeongam circuit, set against a backdrop of coastal marshes and South Korean shipyard cranes, with a best time of one minute 39.630 seconds in the morning and 1:38.673 after lunch.

“I feel like I have a bit of a better foundation this weekend. I can’t remember the last time I had a really strong Friday,” the Briton said.

Red Bull’s Vettel, chasing his fourth win in a row since the end of August and third in succession in Korea, was second quickest in both sessions run in bright sunshine and under cloudless skies.

The German was a mere 0.037 slower in the first, after firing in his best lap in the closing seconds, and 0.108 adrift in the second.

“I think it will be very close this weekend with Mercedes,” Vettel said.

On a quiet opening day, with largely empty stands at the track some three hours by KTX express train south from Seoul, the biggest noise was provided by South Korean fighter jets roaring overhead in formation.

Raikkonen, who struggled with a bad back in Singapore two weeks ago, skidded hard into the tyre wall at the final corner in the closing seconds of the morning session but clambered out of the car without any apparent difficulty.


The 2007 world champion clocked the eighth best times in both sessions.

Red Bull’s Mark Webber, who will have a 10 place grid penalty on Sunday after collecting his third reprimand of the season for a Singapore post-race ‘taxi ride’ on Fernando Alonso’s Ferrari, was third and fourth respectively.

Hamilton’s team mate Nico Rosberg reinforced the idea that the battle lines were drawn between Mercedes and Red Bull with the fourth and third best times.

Vettel is 60 points clear of Alonso, who was sixth and seventh respectively in practice, with six races remaining and has a fourth successive title almost within reach.

He was in a league of his own on the streets of Singapore and there were suspicions on Friday that he was simply keeping his powder dry for Sunday.

The 26-year-old will again be the favourite although Mercedes could make life harder for him.

Marussia’s Venezuelan test driver Rodolfo Gonzalez hit the wall early in the first session when he was almost alone on the circuit.

Britain’s James Calado was also given time in the Force India, with compatriot and race regular Paul Di Resta sitting out the session before returning in the afternoon.