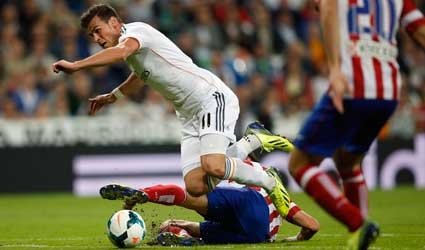 MADRID (Reuters) – Real Madrid’s Gareth Bale will remain in the Spanish capital to recover from a muscle strain rather than join up with Wales for their World Cup qualifiers against Macedonia and Belgium, the Spanish club’s coach Carlo Ancelotti said on Friday.

Bale, who became the world’s most expensive player when he joined from Tottenham Hotspur for a fee of 100 million euros ($136 million) in the close season, missed Wednesday’s 4-0 Champions League win over FC Copenhagen but was named in the Wales squad for the October 11 and October 15 matches.

However, Ancelotti said he would not travel and that he was expected to have recovered from the strain in his left thigh in time to feature in Real’s first outing after the international break, a La Liga clash at home to Malaga on October 19.

“He will stay here to train for 15 days and will be ready for the next match,” Ancelotti told a news conference previewing Saturday’s match against Levante (1800 GMT).

“He’s not happy because he’s eager to play. It’s been a rough period, but psychologically he’s fine,” the Italian added.

Bale’s physical condition has been affected by a disrupted pre-season, during which talks over his move from Tottenham dragged on until near the end of the transfer window.

Despite Real’s 4-0 trouncing of Copenhagen, Ancelotti’s side has yet to shake off doubts about their inconsistency after a 2-2 draw at Villarreal and a 1-0 home defeat by Atletico Madrid last weekend, their first league loss to their bitter city rivals this century.

Real are third in the standings and badly need three points at Levante if they are to avoid falling further behind leaders Barcelona and Atletico, who top the standings with a maximum 21 points.

Ancelotti again emphasised that the departure of playmaker Mesut Ozil, who joined Arsenal on transfer deadline day, had nothing to do with their patchy form.

“We don’t need Ozil. The team is scoring goals,” he said. “The problem is balance and the goals were are letting in.”

Barcelona will look to maintain their perfect record at home to Real Valladolid on Saturday (2000).

Coach Gerardo Martino will again be without World Player of the Year Lionel Messi, who suffered a hamstring injury shortly after scoring his eighth La Liga goal of the season in the 2-0 win at Almeria last weekend.