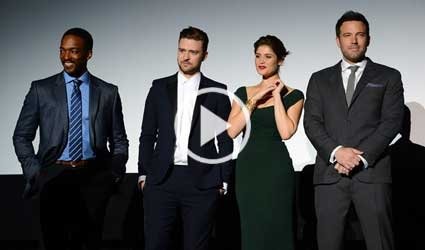 Writers David Levien and Brian Koppelman, who penned the 1998 gambling drama “Rounders,” return to the poker world with “Runner Runner,” out in U.S. theatres on Friday. While gambling is a core theme, the writers said they were inspired by the behaviours and motivations of shady operators from many other industries as well.

“We never set out to intentionally hit a topic. We loved the idea of a maverick businessman who is immune to extradition. It was informed by gaming as well as other business figures,” said Levien of the 20th Century Fox film.

“Runner Runner,” which owes its name to poker slang, follows Timberlake as a graduate student who goes to Costa Rica to confront an online gambling tycoon played by Affleck, who swindles him.

While gambling is actually rarely seen in the thriller, which features luxurious locations, lavish parties and plenty of fight scenes, the portrayal of gambling’s underside was enough to spook casino industry groups like the American Gaming Association (AGA) as they push for a legitimate online poker market.

The AGA has launched a marketing campaign to portray “Runner Runner” as a “cautionary tale” about what could go wrong in the seedy world of unregulated online gaming.

Both Levien and Koppelman were surprised by the trade group’s reaction. “We find it amusing,” said Koppelman.

Despite their insistence that “Runner Runner” is not strictly a movie about gambling Levien and Koppelman appear to be earning reputations as Hollywood’s go-to writers on the subject with credits including the Matt Damon drama “Rounders,” TV poker series “Tilt” and 2007’s casino heist movie “Ocean’s 13.”

Koppelman said the world of gambling intrigued both him and Levien for its “hypocrisy” and how gamblers justify their behaviour.

“These people take giant risks with wild swings of fortune. It’s a rich world to dive into,” he said.

Koppelman added that he and Levien hope to one day write a sequel to “Rounders,” the critically acclaimed behind-the-scenes look at New York underground poker.

So far, “Runner Runner” has drawn mixed critical reviews. The film has earned just a 23 percent rating on review aggregator RottenTomatoes.com and scored 37 out of 100 on Metacritic.com, which rounds up film critic reviews.

Hollywood Reporter film critic Todd McCarthy said the film was a “vaguely ambitious but tawdry melodrama,” adding that it was “lacking both style and insight into the netherworld it seeks to reveal.”