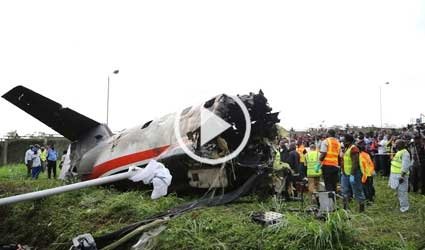 The Associated Airlines plane was flying from Nigeria’s commercial capital to Akure, a southwestern town about 140 miles (225 km) away.

He said he did not know the engine’s maker. But a diplomatic source told Reuters the engine was a Pratt & Whitney Canada, a unit of United Technologies Corp, PW100.

Aviation Ministry spokesman Joe Obi had earlier said 27 people were on the plane but Lagos state emergency management agency chief Olufemi Damilola Oke-Osanyintolu said at the site that in fact only 20 of the 27 seats were filled.

Several local radio stations and Channels TV reported that it was carrying a family and the body of former governor of Ondo state Olusegun Agagu to his funeral.

A Reuters reporter saw emergency workers bring out a coffin from the wreckage.

“The plane was making a lot of noise before it came down,” said witness Rasheed Olajide, an engineer working at the airport. “It appeared to reverse back to avoid crashing into the residential area. It came down at a 45 degree angle.”

Air crashes are relatively common in Nigeria, which despite having Africa’s second-biggest economy has a poor safety record.

“There’s a lot of smoke coming from the runway. There are fire-fighters rushing to the scene,” Rasaki Rhakod, who runs a car service around the airport, told Reuters.

In June last year, 163 people died when a Dana Air plane crashed into a Lagos apartment block in the country’s worst airline disaster in two decades.