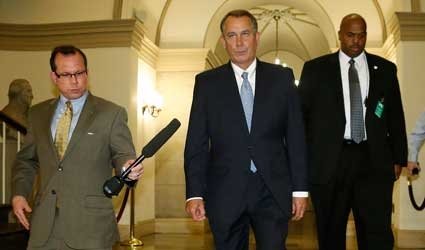 WASHINGTON (Reuters) – President Barack Obama met with Republican and Democratic leaders in Congress on Wednesday to try to break a budget deadlock that has shut wide swaths of the federal government, but there was no breakthrough and both sides blamed each other.

Reid said Obama told Republicans “he will not stand” for their tactics. The White House later issued a statement saying that Obama remains hopeful that “common sense will prevail.”

There was little to encourage hope for a quick solution to the two-day-old shutdown and hundreds of thousands of federal employees remained off the job without pay.

Leaders of the Republican-controlled House of Representatives and the Democratic-led Senate offered token concessions that were quickly dismissed by the other side. Obama, meanwhile, scaled back a long-planned trip to Asia.

Republicans have tried to tie continued government funding to measures that would undercut Obama’s signature healthcare law. Obama and his Democrats say that is a non-starter.

“The president reiterated one more time that he will not negotiate,” Boehner told reporters after the White House meeting. “All we’re asking for here is a discussion and fairness for the American people under Obamacare.”

Reid said Democrats were willing to discuss any way to tackle the budget after a temporary funding bill is passed. “We’re through playing these little games,” he said.

“My friend John Boehner … cannot take yes for an answer,” he told reporters.

The shutdown, which took effect Monday at midnight (0400 GMT Tuesday), has raised questions about Washington’s ability to carry out its most essential duties.

Though it would do relatively little damage to the world’s largest economy in the short term, global markets could be roiled if Congress also fails to raise the debt limit before borrowing authority runs out in coming weeks.

The shutdown has closed landmarks like the Grand Canyon, cut off government economic data reports and prevented some cancer patients from receiving cutting-edge treatment.

United Technologies Corp, which makes Sikorsky helicopters and other items for the military, said it would be forced to furlough as many as 4,000 employees if the U.S. government shutdown continues through next week, due to the absence of government quality inspectors.