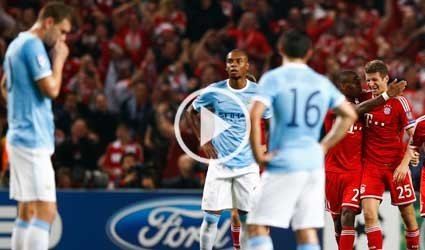 Cristiano Ronaldo’s hot form continued with a double in Real Madrid’s 4-0 rout of FC Copenhagen but he was not the only revered striker among the goals with Zlatan Ibrahimovic also netting twice as Paris St Germain brushed aside Benfica 3-0.

Both, though, were outshone by Greece forward Kostas Mitroglou who grabbed a hat-trick in Olympiakos Piraeus’s 3-0 romp at Anderlecht.

A dramatic finale in Turin saw Galatasaray, with manager Roberto Mancini taking charge for the first time, snatch a 2-2 draw with Juventus thanks to Umut Bulut’s late goal.

Brazil forward Taison’s 76th-minute strike earned Shakhtar Donetsk a 1-1 draw at home to Manchester United after the visitors had led through Danny Welbeck.

Slick Bayern set the standard last season under former coach Jupp Heynckes and a dominant display at the Etihad, to make it two wins from two in Group D, left City under no illusions as to the level they must attain to challenge the continent’s elite.