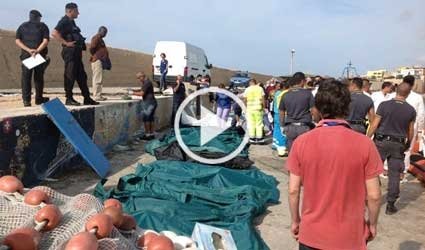 LAMPEDUSA, Italy (Reuters) – Italian rescue workers have pulled 111 bodies from the migrant boat that sank off the island of Lampedusa on Thursday and expect to recover more than a hundred more from the submerged wreck, a coastguard official said on Friday.

Authorities have rescued 155 survivors after the 20-metre (66-foot) boat carrying around 500 migrants, mostly Eritreans and Somalis, sank no more than 1 kilometre (half a mile) from shore.

“Two motorboats remained in the area overnight and this morning divers resumed work but we expect to recover more than a hundred bodies from the ship,” coast guard official Floriana Segreto told Reuters.

In all, more than 300 people are believed to have died in one of the worst tragedies in Europe’s decades-long migrant crisis.

The disaster was triggered when fuel aboard caught fire, causing a panicked rush to one side of the boat which capsized and sank, throwing hundreds of people into the water.

Italy is holding a day of mourning on Friday, and schools will observe a minute’s silence in memory of the victims.