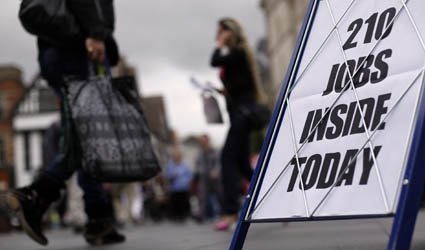 LONDON (Reuters) – The number of advertised jobs in Britain rose to its highest level in four years in September, according to a survey released by a jobs website on Tuesday, another sign that the economic recovery is gaining momentum.

The Reed Job Index, assembled using data from around 150,000 vacancies advertised on the website of recruitment firm Reed Global, showed vacancies grew 24 percent on an annual basis to hit the highest number since the launch of the index in 2009.

However, wages remained stagnant for a third month, it found.

Unemployment, currently 7.7 percent, has become one of the closest watched economic indicators since the Bank of England said it would not think about raising interest rates from a record low until the jobless rate falls to 7 percent.

Reed’s data indicated that job prospects were improving across all regions in the UK and in a range of industries.

Vacancies in manufacturing and retail rose by 32 percent and 31 percent respectively compared to the same period last year. The construction and property sector saw a 78 percent year-on-year rise in vacancies.