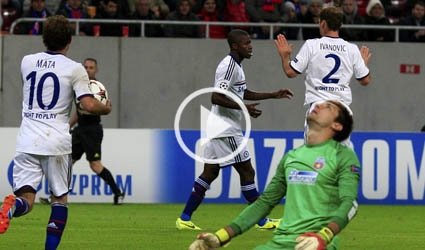 BUCHAREST (Reuters) – Brazil midfielder Ramires scored twice as Chelsea got their Champions League Group E campaign back on track with a convincing 4-0 win over Steaua Bucharest at the National Arena on Tuesday.

Slick-passing Chelsea dominated from start to finish and could have won by a bigger margin.

The visitors went ahead in the 20th minute when Ramires lifted the ball over the goalkeeper from three metres and they made it 2-0 with an own goal from Daniel Georgievski just before halftime.

Ramires made it 3-0 with a thumping finish soon after the interval after the dangerous Andre Schurrle surged down the left and found Oscar who teed up his fellow countryman.

Frank Lampard completed the rout with a low shot into the corner from 18 metres after good work by substitute Willian on 90 minutes.

Chelsea have three points from two games in the group while Steaua are bottom on zero.