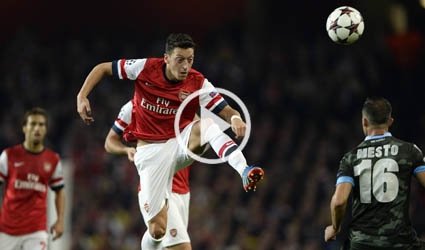 LONDON (Reuters) – Mesut Ozil bewitched Napoli to conjure up a 2-0 Champions League win for Arsenal on Tuesday and end the Italian side’s unbeaten start to the season.

The Germany midfielder scored the opening goal, his first for Arsenal, with a superb left-foot effort from the edge of the penalty area after eight minutes and set up Olivier Giroud for Arsenal’s second after 15.

Any lingering doubts that the former Real Madrid player was worth the 43 million pounds ($60 million) that Arsene Wenger paid for him in August were swept away in a magical first-half display of precision passing, great movement and feints, and Aaron Ramsey played his full part as the sorcerer’s apprentice.

Arsenal’s second win after their 2-1 success in Marseille put them on six points in Group F alongside Borussia Dortmund, who beat Marseille 3-0 on Tuesday. Arsenal and Dortmund meet in the next two rounds of games.

Arsenal made two changes from the side that beat Swansea 2-1 at the weekend, bringing Tomas Rosicky straight back from injury into the midfield to play behind Mikel Arteta who replaced England’s Jack Wilshere.

The home side were further boosted by the failure of Napoli striker Gonzalo Higuain, an Arsenal target during the summer transfer window, to recover from a calf injury.

Goran Pandev kept his place after scoring both goals in Napoli’s 2-0 defeat of Genoa on Saturday.

Arsenal dominated possession from the kick-off and the opening goal followed two flashes of individual skill, first by Giroud to put Ramsey in space down the right and then from Ozil.

He opened up his body to hit Ramsey’s cross first time past Pepe Reina from 18 metres with all the grace, timing and power of a Roger Federer forehand winner.

Reina saved a Mathieu Flamini effort soon after the eighth-minute opener as Napoli failed to stem the Arsenal tide of possession.

It was no surprise when Ozil profited from a poor Napoli throw-in near the Italians’ goal line to race through on the right and set up Giroud for a tap-in from five metres.

The visitors’ centre-back Miguel Britos should have done better with a free header from a corner halfway through the first period but Arsenal had almost complete control in midfield and funnelled attack after attack down the flank guarded by left-back Camilo Zuniga.

Rafael Benitez’s side showed more cohesion in the second half but the threat to Wojciech Szczesny’s goal was largely restricted to shots from distance.

Substitute Dries Mertens managed a shot on target shortly after coming on but Arsenal nearly scored a third when Laurent Koscielny’s close-range shot was blocked by Reina with 15 minutes left.