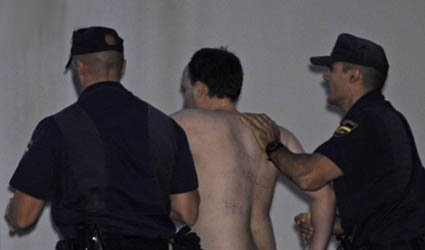 A 38-year-old man from Almeria, Carlos DS was arrested last week after demonstrating naked outside a Madrid hospital where King Juan Carlos, was undergoing an operation.
While the Queen was being received by doctors at the hospital doors the man, who was stark naked, crossed the barrier where the reporters, photographers and cameramen were situated and started screaming against the ‘hidden crimes of the CIA.’

He was immediately arrested by National Police officers who were guarding the area. After being whisked away he was arrested and taken to a police station. The exhibitionist was carrying a backpack which was inspected by a sniffer dog trained in explosives, although nothing suspicious was found.
The ma, who spent the night at the police station, has no previous criminal record. He was charged with disorderly conduct and resisting arrest.