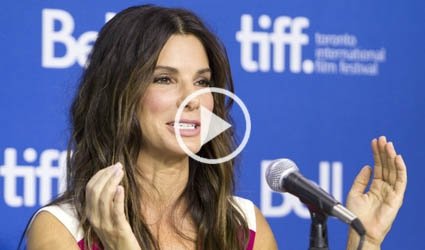 LOS ANGELES (Reuters) – Watching an astronaut tumbling into the void of deep space might make a mere mortal’s own adversities seem rather small.

But “Gravity,” a drama starring Sandra Bullock and showing in U.S. theatres on Friday, was born out of the setbacks suffered by one man in the midst of the last recession: its director and co-writer, Alfonso Cuaron.

The Mexican filmmaker had already achieved international success with films like “Harry Potter and the Prisoner of Azkaban” in 2004 and “Children of Men” in 2006. But in 2009, financing on a new film fell apart, leaving him in the lurch.

“That was just one element of a period of adversities that was striking my life,” Cuaron told Reuters. “And sometimes adversities are like that. They come in big waves.”

The 51-year-old filmmaker and son Jonas Cuaron, 30, decided they would not sit around licking their wounds, and quickly got to work on a script about adversity, weaving the theme through tense and gripping action. They soon settled on space, a fascination for the Cuarons.

“We said ‘let’s take a character in a very adverse situation’ and we starting ping-ponging and this image came up of this astronaut just spinning into black emptiness,” said Jonas Cuaron.

And that is pretty much how “Gravity” begins, with Bullock playing novice astronaut and engineer Dr. Ryan Stone alongside George Clooney as mission commander Matt Kowalski. Their space station is hit by debris from the demolition of an obsolete satellite, sending the two reeling into deep space with depleting oxygen and remote chances of returning to Earth.

Ryan Stone soon finds herself alone, drifting into the void, with a tragic backstory that diminishes her desire to get home. For Alfonso Cuaron, Stone is a “victim of her own inertia, living in her own bubble.”

“She has to learn to come out of the bubble, shed her skin to begin a journey of rebirth,” Cuaron said.

The filmmakers and Warner Bros. Pictures ended up spending some $80 million (49 million pounds) to make the 3D film, with technological innovations that reproduce space and zero gravity in ways never seen on screen.

The film opens this weekend in U.S. theatres after showing at both the Venice and Toronto film festivals to critical acclaim.