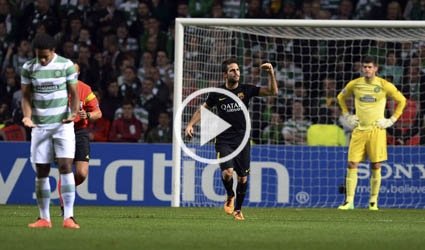 (Reuters) – Barcelona, missing the mercurial talent of the injured Lionel Messi, laboured to a 1-0 win in their Group H Champions League game against 10-man Celtic in Glasgow on Tuesday.

The only goal came after 76 minutes when Neymar swept the ball out to substitute Alexis Sanchez on the right and his back-post cross was headed home by the unmarked Cesc Fabregas.

By then Celtic were down to 10 men having had Scott Brown dismissed just before the hour mark for catching Neymar in the back with his boot after the Brazilian went down in a challenge.

In an absorbing contest of artistry against industry at an electric Parkhead stadium, Barcelona, as expected, dominated possession but created little in a match of few chances.

Celtic’s best chances came after the sending off and before Barca scored when James Forrest forced a superb diving save out of Victor Valdes and Charlie Mulgrew headed wide of an open goal from the resulting corner.

Near the end Celtic keeper Fraser Forster produced three fine saves of his own to keep Barcelona at bay, the first a double effort as Neymar then Alexis Sanchez were thwarted.

The win gives Barcelona a maximum six points from two games and leaves Celtic still looking for their first point.