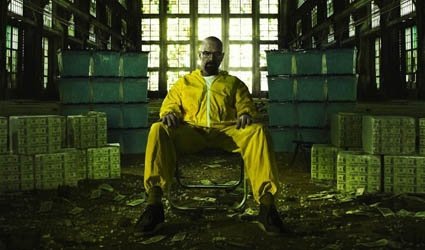 According to Nielsen data provided by AMC on Monday, the 75-minute finale episode entitled “Felina” delivered a series record in viewership as fans saw chemistry teacher turned drug kingpin Walt tie up the loose ends of his crumbling drug empire and die just as the police finally catch up with him.

The 18-49 age group coveted by advertisers drew 6.7 million viewers, up 300 percent from last year’s “Breaking Bad” season finale, reflecting the significant growth in the show’s audience over the past year.

AMC, owned by AMC Networks Inc, split the fifth and final season of the Vince Gilligan-created series into two parts, with the first half airing in 2012, and the second in 2013.

The second half, which began airing in August, drew an average of 5.2 million viewers to see the conclusion of Walt’s saga, more than double last year’s audience for the show, according to AMC.

“It all starts with Vince Gilligan who really only ever asked for one thing – the opportunity to end the show on his own terms. That is exactly what Vince did last night and, as always, brilliantly so,” Charlie Collier, AMC president, said in a statement.

“Breaking Bad” became a hot topic online on Sunday, as viewers discussed Walt’s ending. The fifth season has garnered more than 23 million mentions on Facebook since August, and 3 million people posted about the finale on Sunday, according to data from Facebook.

On Twitter, hashtags such as #GoodbyeBreakingBad became trending topics throughout the day, with 1.24 million tweets generated during the live broadcast of the finale, according to AMC.