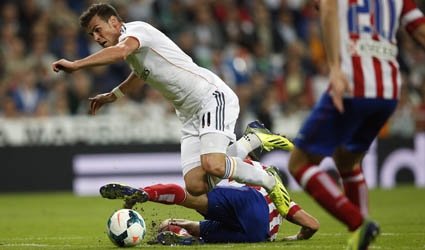 MADRID (Reuters) – Real Madrid will be without record signing Gareth Bale for Wednesday’s Champions League Group B match at home to FC Copenhagen after the Wales winger aggravated an injury to his left thigh.

Bale, who became the world’s most expensive player when he joined from Tottenham Hotspur for a fee of 100 million euros (83.4 million pounds) in the close season, trained apart from his team mates in the gym on Tuesday, Real said on their website.

He will have tests on Wednesday to determine the extent of the problem, they added.

Bale made his home debut for the nine-times European champions when he came on at halftime in Saturday’s 1-0 derby defeat to Atletico Madrid.

He was due to play his first game at the Bernabeu against Getafe the previous weekend but was withdrawn from the starting lineup after tweaking his thigh muscle in the warmup.

Real won their opening Champions League match 6-1 at Turkish side Galatasaray but have faltered in La Liga and Saturday’s defeat left them five points behind champions Barcelona and Atletico, who both have a perfect 21 points from seven games.