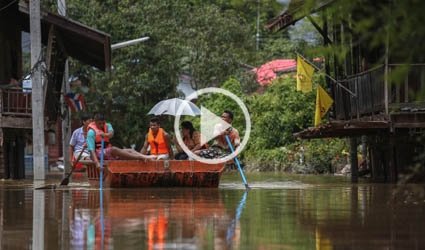 BEIJING/BANGKOK (Reuters) – Seventy-four Chinese fishermen were missing on Monday after a typhoon sunk three fishing boats in the South China Sea as Thailand and Vietnam braced for torrential rain and flooding.

The ships were hit by Typhoon Wutip on Sunday as they navigated gales near the Paracel Islands, about 330 km from China’s island province of Hainan, state news agency Xinhua said, citing sources with the Hainan maritime search and rescue centre.

Rescuers had rescued 14 survivors, the sources said. The boats were sailing from the southern province of Guangdong.

Rains from the storm are expected to reach Vietnam on Monday before hitting Thailand on Tuesday.

Thai officials warned that more heavy rains could inundate already flood-hit areas of the northeast. At least 22 people have been killed in this year’s flooding.

Authorities in central Vietnam have moved children and elderly people to schools and other more solid buildings ahead of the storm.

In the central province of Quang Tri, an estimated 82,000 people would need to be evacuated if Wutip made a direct hit, a government statement said.

Vietnam said heavy rain had been falling in several central provinces while flooding and landslides could strike the region later this week.

Typhoons gather strength from warm sea water and tend to dissipate after making landfall. They frequently hit Taiwan, Japan, the Philippines, Hong Kong and southern China during a typhoon season that lasts from early summer to late autumn.