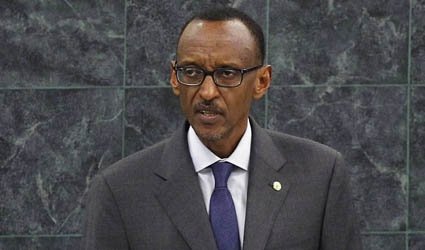 “It’s like, you know, the world has decided, for Congo, you ask Rwanda. Why? I don’t understand,” Kagame told Reuters on the sidelines of the annual gathering of world leaders at the United Nations in New York.

Millions of people have died from violence, disease and hunger in Congo’s resource-rich eastern borderlands during nearly two decades of ethnically driven conflict that has its roots in Rwanda’s 1994 genocide.

A more than year-long insurgency by M23 rebels is the latest incarnation of a Tutsi-dominated rebellion. There have been repeated, and unsuccessful, efforts to integrate rebel groups into the Congolese army. U.N. experts and the Congolese government have accused Rwanda of backing the rebellion, a charge Rwanda denies.

The United States and other countries have called on Kigali to end support for M23 rebels, saying there is evidence Rwandan military officials have been involved.

“My question always is, why doesn’t the country, the state of Congo, deal with the issues themselves? They should be the ones telling the world nothing is working, or what they think can work for them,” Kagame said late on Sunday.

Kagame was attending the “This World: The Values Network” event in New York, with other guests including Nobel Peace laureate and Holocaust survivor Elie Wiesel.

“I cannot be the one to keep being asked to answer what should work for Congo. This is a serious problem,” he said.

Congo’s army and a 17,000-strong U.N. peacekeeping mission, known as MONUSCO, have struggled against M23, which briefly occupied the eastern city of Goma in November, forcing Congolese President Joseph Kabila to accept the Ugandan-brokered peace talks as a condition of the rebels’ withdrawal.

However, with the help of a new U.N. Intervention Brigade – created in the wake of Goma’s seizure and given a tough mandate to neutralize armed groups – the army has pushed M23 fighters away from the city of one million.

Kagame said of the Intervention Brigade: “I don’t think they have done much in the way of resolving the problem, looking at the time they have been there, at the results we have on the ground.”