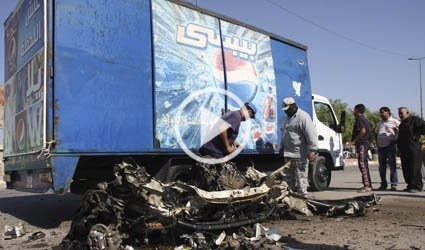 The deadliest single attack took place in Sadr City, where a man parked a white car packed with explosives near a place where day labourers had gathered. The vehicle blew up soon afterwards, killing at least seven people, including two soldiers.

“The driver said he would move it soon, but the car exploded a few minutes later,” said Abu Mohammed, a worker at the scene.

Footage from the scene showed the remains of a car torn in two surrounded by damaged taxis and bits of metal melted in the heat of the blast.

Altogether 14 car bombs exploded across the Iraqi capital in apparently coordinated attacks. It was not clear who was behind them, but hardline Sunni Muslim militants who view Shi’ites as non-believers have been intensifying their insurgency this year.

Iraq’s delicate sectarian balance has been strained by the civil war in neighbouring Syria, where mainly Sunni rebels are fighting to overthrow a leader backed by Shi’ite Iran.

Both Sunnis and Shi’ites have crossed into Syria from Iraq to fight on opposite sides of the conflict.

Al Qaeda’s Iraqi and Syrian branches merged earlier this year to form the Islamic State of Iraq and the Levant, which has claimed responsibility for attacks on both sides of the border.

On Sunday, a suicide bomber blew himself up at a Shi’ite funeral in a mosque in the town of Mussayab, 60 km (40 miles) south of Baghdad, killing at least 40 people.

More than 6,000 people have been killed in violence so far this year, according to the monitoring group Iraq Body Count.