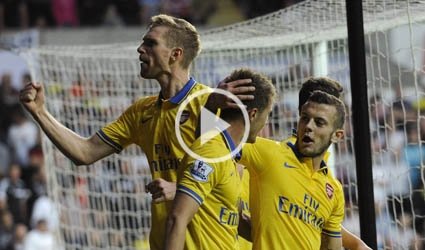 LONDON (Reuters) – Arsenal held on to top spot with a 2-1 win at Swansea in the Premier League on Saturday after Tottenham drew with Chelsea and both Manchester clubs suffered shock defeats that left them trailing London’s big three.

Arsenal continued to make a mockery of gloomy close-season predictions as they went two points clear with second-half goals from Serge Gnabry and Aaron Ramsey before a late consolation from Swansea’s Ben Davies.

United suffered more misery when they went down 2-1 at home to West Bromwich Albion in their worst start to a Premier League season with the champions in the bottom half after six games.

Morgan Amalfitano and Saido Berahino scored for the visitors either side of a Wayne Rooney leveller at Old Trafford to leave United 12th a week after a crushing defeat at local rivals City.

Spurs stay second, two points adrift of their north London rivals, after a 1-1 draw at home to Chelsea while Southampton’s watertight defence held firm as they climbed to fourth spot with a 2-0 victory at home to Crystal Palace.

Arsenal left south Wales with three points and a Welshman to thank for helping them come out on top as two of the Premier League’s finer proponents of the art of passing went toe-to-toe.

Ramsey, a former Cardiff City player, was again the conductor at the heart of Arsenal’s midfield, setting up Gnabry for the opener 13 minutes into the second half, before extending his own excellent scoring record minutes later.

Davies’s late consolation helped set up a nervy finale for the visitors, who held on to extend their club record of consecutive away wins in all competitions to 12.

Manchester United might have thought they had exorcised last weekend’s crushing 4-1 reverse at City by beating arch rivals Liverpool in the League Cup third round in midweek, but the demons returned against West Brom.

The defeat will heap further pressure on manager David Moyes, whose every decision has been under the microscope since he replaced Alex Ferguson in the close season.

The two goals they conceded against West Brom came straight from the top drawer and Amalfitano’s effort nine minutes into the second half was a moment of individual brilliance.

Picking up possession on the halfway line, he rode a Michael Carrick challenge, put the ball through Rio Ferdinand’s legs and then showed great composure to chip goalkeeper David De Gea.

After Rooney had restored parity just before the hour mark with an inswinging free kick that evaded everyone on route to goal, Berahino rifled the visitors into the lead again in the 67th after United failed to deal with a long ball.

West Brom had not won at Old Trafford since 1978 and the result ensured United made their worst start to a top-flight campaign after six games since 1989-90.

There was small consolation for United in the fact that rivals City were undone at Aston Villa.

City, who are still waiting for their first away win of the season, went ahead thanks to Yaya Toure’s volley on the stroke of halftime and Edin Dzeko headed them back into the lead in the 56th after Karim El Ahmadi had levelled from close-range.

“I must be patient,” City manager Manuel Pellegrini said when asked about his side’s suspect defending. “It is important to keep calm. In general, I was very happy with the way my team played today and we deserved a different score.”

Tottenham’s clash with Chelsea at White Hart Lane was billed as a battle between managers Andre Villas-Boas and Mourinho and the encounter turned on the latter’s decision to introduce playmaker Juan Mata at halftime.

A fired up Spurs had looked comfortable after taking the lead through Gylfi Sigurdsson, whose low finish ended a flowing move involving Christian Eriksen and Roberto Soldado.

However, Mata’s introduction swung the momentum in Chelsea’s favour and the Spaniard’s curling free kick was headed in by John Terry 20 minutes after the interval.

Torres, who had been booked after a coming together with defender Jan Vertonghen, was given a second yellow card after an innocuous aerial challenge with the Belgian international.

Southampton’s record signing Dani Osvaldo scored his first goal for the club and Rickie Lambert added a second as the south coast side secured a comfortable win at home to Crystal Palace.

Their unheralded defence have the joint best record in the league along with Spurs, having conceded two goals all season.

Jordan Mutch scored a spectacular injury-time winner for Cardiff at Fulham with an unstoppable 25-metre strike, while a Robbie Brady penalty helped fellow promoted side Hull climb to seventh after their victory over West Ham.