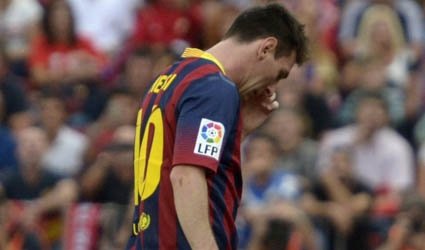 MADRID (Reuters) – Barcelona forward Lionel Messi will be out of action for two to three weeks with a small hamstring problem in his right leg, the Spanish champions said in a statement on Sunday.

The World Player of the Year was substituted in Barca’s 2-0 La Liga victory at Almeria on Saturday soon after opening the scoring in the 21st minute with his eighth goal of the campaign.

The Argentine will miss Barca’s trip to Celtic in the Champions League on Tuesday and Saturday’s visit of Real Valladolid in La Liga.

There is then a two-week break for internationals when Argentina play World Cup qualifiers against Peru and Uruguay before the La Liga leaders return to action at Osasuna on the weekend of October 19/20.

Messi suffered a hamstring problem in his left leg at the beginning of the season.