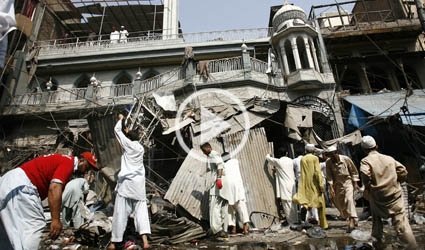 PESHAWAR, Pakistan (Reuters) – Twin blasts in the northwestern Pakistani city of Peshawar killed 33 people and wounded 70 on Sunday, a week after bombings at a church there killed scores, police and hospital authorities said.

Islamist violence has been on the rise in Pakistan in recent months, undermining Prime Minister Nawaz Sharif’s efforts to tame the insurgency by launching peace talks with the Taliban.

The blasts outside a police station hit an area known as Quiswakhani, or the storytellers’ bazaar, crowded with shoppers. Police said they thought at least one of the explosions in the city close to the Afghan border had been caused by a car bomb.

There was no immediate claim of responsibility. Taliban spokesman Shahidullah Shahid condemned the attack.

Two policemen tried in vain to hold back the crowd gathered outside the Lady Reading Hospital in Peshawar, where many of the victims had been taken.

Distraught relatives dialled mobile phone numbers of those caught up in the blasts but were unable to get through. Women sobbed as ambulances pulled up with more bodies.

Shop owner Sher Gul said he had made repeated trips on his motorbike to bring six people to hospital. Gul cursed a provincial government minister who came to visit the victims.

“Why have you come so late?” Gul shouted.

Inside the hospital, people tripped over the injured lying in corridors as they hunted for loved ones. Nine members of one family were among the dead.

The blasts follow an attack by a Taliban faction on Peshawar’s Anglican church last Sunday that killed more than 80 people, the deadliest assault on Christians in predominantly Muslim Pakistan.

The Taliban have repeatedly rejected Pakistan’s constitution and have called for the full implementation of Islamic law and for war with India.

Sharif was due to meet Indian counterpart Manmohan Singh on the sidelines of the United Nations General Assembly later on Sunday, only hours after Singh described Pakistan as the “epicentre of terrorism in our region”.

Another Pakistani politician, former cricket player Imran Khan, has suggested the Taliban might open an office in Pakistan to help negotiations, but the suggestion drew an angry response from those caught up in Sunday’s blasts.

“The government wants to open an office for the Taliban? What office? They are killing us. For how long do we have to suffer like this? I have no hope,” said Waheed Khan as he searched for his nephew, a rickshaw driver.