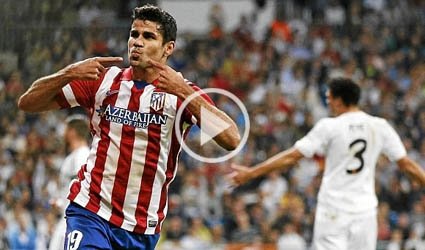 MADRID, Sept 28 (Reuters) – Atletico Madrid ended a run of 23 league derbies without a win when Diego Costa struck early to clinch a 1-0 victory over city rivals Real Madrid at the Bernabeu on Saturday.

Following up their 2-1 King’s Cup final victory after extra time at the same venue in May, Atletico proved they had finally shaken off their inferiority complex with another gritty La Liga performance.

Brazilian striker Costa took his tally for the season to eight league goals when he broke away to score in the 11th minute, and Atletico could have avoided a nervy finale by putting away some of the clear chances they created.

Diego Simeone’s side joined Barcelona at the top of the table with a maximum 21 points from seven games but are second on goal difference. Real stayed third with 16 points.

“We are delighted with the result and with the team effort,” Atletico and Spain midfielder Koke told reporters.

“Title challengers? We are going to take it game by game.”

For Real coach Carlo Ancelotti it was a severe setback to be left five points behind the top two while still in September, and the Italian was self-critical.

“We have to act after this with a better attitude and clearer ideas,” he told a news conference.

“The moment isn’t easy and we have to find a quick solution.”