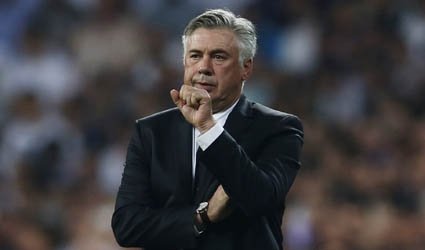 MADRID (Reuters) – The honeymoon period for Carlo Ancelotti has run its course at Real Madrid and the Italian faces his first rumblings of discontent after Saturday’s 1-0 home defeat to Atletico Madrid in the city derby.

Real lie third in La Liga after seven games with 16 points, five adrift of champions Barcelona and Atletico who have both swept to perfect starts in a league that allows very little margin for error.

Real and Barca won the last two league titles, in 2012 and 2013 respectively, by amassing 100 points each, dropping only 14 points over their 38 games, and on current form Ancelotti’s team appear to be losing their way rather than improving.

They drew 2-2 at promoted Villarreal two weeks ago and were rescued from a 1-1 draw at another promoted club, Elche, during the week when they were awarded a controversial penalty deep into added time, which Cristiano Ronaldo converted.

Daily El Mundo ran the headline: “Atletico ring the alarm bells at the Bernabeu” over their match report, while a leader in Madrid-based sports daily AS said: “Ancelotti has lost all his credit within a few days.”

Ronaldo jumped to Ancelotti’s defence after the game.

“We have to recognise we played badly. I played badly,” the Portugal forward told Spanish broadcaster Canal Plus.

“The league is going to be tough but we have to keep our heads up and continue to work to improve. It isn’t the coach’s fault, it’s the players’.

“I am very pleased with the coach. He is one of the best I have worked with in my career.”

Ancelotti was whistled at by sections of the crowd when he substituted midfielder Isco for striker Alvaro Morata in the second half.

The fans have lost patience with inconsistent striker Karim Benzema and wanted the French international removed instead of new recruit Isco who has quickly become a crowd favourite.

Ancelotti was brought in to replace Jose Mourinho at the end of last season, and the former AC Milan, Chelsea and Paris St Germain boss has set about trying to change the way the team plays.

At his presentation in June he promised to produce ‘spectacular football’ with an attacking style based upon possession, in contrast to his predecessor who preferred to play on the counter.

However, Real are struggling to make that change, in particular when it comes to breaking down opponents who sit deep and gather men behind the ball, as Atletico do. The visitors won the game by dominating the midfield.

“It was the same problem as in recent games,” Ancelotti told the post-match news conference.

“The build-up is slow and when the ball reaches the forwards there is no space. We need to be a bit more direct, move a bit quicker and play with greater movement. The system isn’t the problem, the problem is speed.

“I don’t think the league title is getting away from us. Five points behind is significant but the league is a long race, and we have time to recover.”

For Atletico, it was a second victory at the Bernabeu in five months, after they beat their city rivals in the King’s Cup final there 2-1 after extra time last May, ending a 14-year run without a derby victory.

Diego Simeone’s side lost the Spanish Super Cup against Barcelona only on the away goals rule after a 1-1 draw at the Calderon and a 0-0 draw at the Nou Camp last month, and a clean sheet at the Bernabeu proves what tough opponents they have become.

The Argentine continues to dismiss the idea that Atletico can realistically compete with Real and Barca for the championship next May, but Ancelotti thinks otherwise.

“They are a very solid team with a great deal of quality, they play very well and are very compact,” he said. “I think they can challenge for the title.”