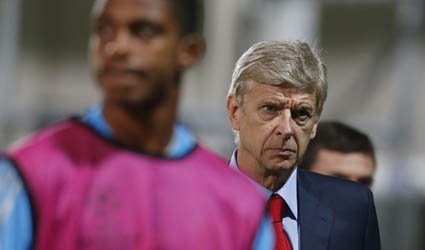 (Reuters) – Arsenal manager Arsene Wenger would happily see out the rest of his years at the north London club whose consistent support over nearly 17 years in the post has made him shun plenty of other job offers.

The longest-serving manager in the Premier League by around 14 years, Wenger told a news conference on Friday that majority shareholder Stan Kroenke’s belief that the Frenchman was central to his long-term vision for the club was a big boost.

“I am very honoured to have the support of Stan Kroenke and that he thinks I can help the club. That is a huge confidence vote, that is of course for me something that is very positive,” Wenger said.

Kroenke was full of praise for the 63-year-old manager, whose contract runs out at the end of this season, in an interview with British newspaper The Daily Telegraph published on Friday.

“There’s no one I feel more strongly about and I think he is doing a great job,” Kroenke said.

“We have been very supportive, we have never wavered, we are proud of him, proud of the club, the way the club is run and how it holds itself out to the world.”

With Kroenke backing him so openly, Wenger talking about his love for the club and Arsenal enjoying an excellent start to the season, a new deal seems likely to be a formality.

“Arsene is his own man, he will make up his own mind,” Kroenke said. “There is a lot of pressure in the job, he has handled it very well but at some point we all make up our minds whether we continue in our careers.

“I don’t want to say something about Arsene that is not the way he feels but, to me, I think he seems to love what he does.”

Wenger, whose team are top of the Premier League on goal difference from Tottenham Hotspur with 12 points from five games, put his longevity down to the club’s mentality in an era where trigger-happy owners sack managers just months into a job.

“I’m very grateful to this club because during the 17 years we had ups and downs they have always shown big faith in me and they let me always do the job like I thought it had to be done,” he said.

“If I’m still here today it’s because I got that consistent support from inside the club. I turned many offers down because I rate what I’ve got here and I always thought this club is special on that front.”

The highs include Wenger leading Arsenal to three Premier League titles and four FA Cups, while among the lows have been fan frustration that the trophies have dried up with the last one coming in 2005.

He has also battled criticism at a lack of activity in the transfer market but answered it in style with this month’s deadline-day coup in signing Germany midfielder Mesut Ozil from Real Madrid.

If Kroenke gets his way, there could be plenty more action on the Wenger rollercoaster.

“Honestly, I would love to be here forever because that would mean I would be immortal but I am not naive enough to believe that so just what I would like to do as long as I am here is to give the best for this club because I love his club of course,” Wenger said.

“It’s a long time and a short time (in the job), because I don’t know where the 17 years have gone. Our job has a good advantage, you just look forward to the next game, you never look back.”

Arsenal’s next match is a trip to Swansea City on Saturday (1630 GMT) in the Premier League with midfielders Aaron Ramsey and Mathieu Flamini facing fitness tests on thigh and shoulder problems respectively.

Wenger said winger Theo Walcott had come through minor surgery on an abdominal injury but was likely to be out for up to five weeks.