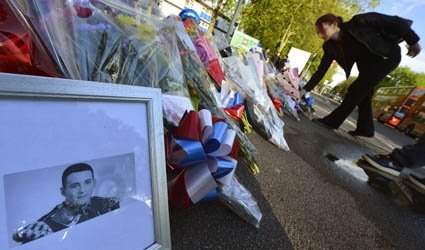 LONDON (Reuters) – Two men pleaded not guilty on Friday to murdering a British soldier whose killing in broad daylight on a busy London street in May horrified the nation.

Drummer Lee Rigby, 25, a veteran of the Afghan war, was hacked to death on May 22 near an army barracks in Woolwich, southeast London. A post-mortem examination gave the cause of death as “multiple incised wounds”.

The two men, wearing red T-shirts, spoke only to confirm their names with both also using their Islamic names – Mujahid Abu Hamza for Adebolajo and Ismail Ibn Abdullah for Adebowale. Their trial is due to start on November 18.

Rigby’s widow Rebecca broke down in tears as she watched the hearing.