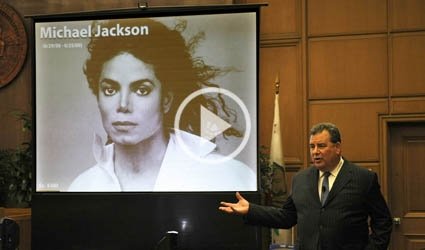 LOS ANGELES (Reuters) – The wrongful death lawsuit filed by the family of late pop star Michael Jackson against his concert promoter is now in the hands of a jury, and the verdict could have far-reaching implications for how the entertainment industry does business with its biggest stars.

The 21-week trial, which has opened a window into the private life and last days of the King of Pop, has put not only concert promoter AEG Live on trial but also the entertainment industry’s live-performance business model, analysts say.

After closing arguments concluded on Thursday, the judge sent the jury to deliberate and a verdict is expected some time next week, if not earlier. Jackson family lawyers have suggested in court documents that damages could exceed $1 billion.

“If AEG is found liable, that puts these companies on the line for millions and billions of dollars, and it is already causing the industry to rethink how the structure is set up,” said Jo Piazza, the author of “Celebrity, Inc.” and a celebrity branding consultant.

Currently, entertainment producers typically pay up-front sums running into millions of dollars to performers in exchange for being able to have greater control over some of the performers’ affairs.

The lawsuit alleged that “AEG came to control much of Jackson’s life. The home Jackson lived in was provided by AEG; his finances were dependent on AEG, and his assets stood security if he failed to perform.” Those assets included The Sony/ATV music catalogue owned by Jackson, which even includes iconic Beatles songs.

The verdict “could have a chilling effect on how much micro-management of a star’s life companies like AEG and other production companies have,” Piazza said.

“But the reason the micro-management even exists is to make sure that the celebrities, the talent, is in the best position possible to make money for the production company,” she added.

That kind of control is the crux of the wrongful death lawsuit filed by Jackson’s mother, Katherine Jackson, and his three children.

In the suit, Jackson’s family alleges that privately held AEG Live, one of the world’s top concert promoters, negligently hired cardiologist Conrad Murray as Jackson’s personal physician and ignored signs that the singer was in poor health.

The “Thriller” singer died in 2009 in Los Angeles at age 50 from an overdose of surgical anaesthetic propofol.

Murray, who was caring for Jackson as the singer rehearsed for his series of 50 comeback “This Is It” concerts, was convicted of involuntary manslaughter in 2011 for administering the propofol that killed the star.

“It’s the kind of case that every entertainment lawyer is paying attention to because everybody in the entertainment industry has assistants and sometimes that entails medical attention as well,” said John Nockleby, a professor at Loyola Law School in Los Angeles.

AEG Live has argued that Jackson had prescription drug and addiction problems for years before entering into any agreement with the company.

It also has said that it did not hire or supervise Murray and could not have foreseen that the physician would have posed a danger to the singer.

“The industry is watching and waiting and seeing very much how this plays out,” said Jody Armour, a law professor at the University of Southern California who specializes in personal injury claims.

“It could have a deterrent effect on corporations going forward, and how much and how aggressively they push entertainers to meet their contractual obligations,” he added.

One change Piazza foresees in the industry’s business model would be in how producers would start coupling an entertainer’s pay together with fulfilling their contract.

“I think the big impact this trial will have is lessening those gigantic, multi-million dollar up-front payments and shifting the model towards a more back-end, profit-sharing model because then it would put the responsibility more on the talent to perform,” she said. “They’ll be making the money based on their performance.”

But Reisman believes that the financial pressure for companies like AEG Live is too significant for a substantial change in how they operate or control artists.