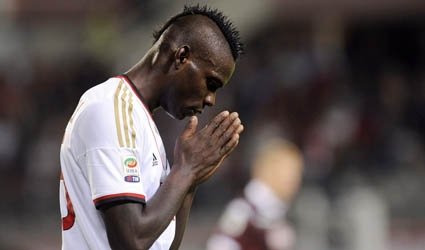 (Reuters) – Maverick AC Milan forward Mario Balotelli has apologised for a sending-off against Napoli which earned him a three-match ban but claimed he was provoked.

Balotelli was dismissed for arguing with the referee at the end of Sunday’s 2-1 home defeat and suspended the following day.

“I apologise to my team mates, who train hard every day. I also apologise to the referee,” he said in an interview with Sky Sports Italia. “I reacted the wrong way to provocation.

“If Mario makes a bad mistake, Mario should be punished…But against Napoli it was the same old story, the fouls against me didn’t count for anything, I was the only one who could do anything wrong.”

(Writing by Brian Homewood in Berne; Editing by John Mehaffey)