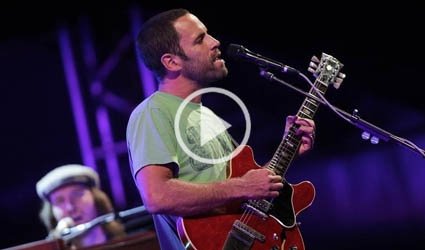 Johnson’s “From Here to Now to You” sold 117,000 copies in its first week, according to figures from Nielsen SoundScan. It was the only album to cross the 100,000 sales mark this week.

Country music singer Justin Moore debuted at No. 2 with his third studio album, “Off the Beaten Path,” selling 96,000 copies, while fellow country music artist Chris Young came in at No. 3 with “A.M.,” selling 52,000 copies.

Other debuts included Maybach Music Group’s “MMG: Self Made 3,” at No. 4, a compilation featuring the record label’s artists including Meek Mill, Wale and Rick Ross. Swedish DJ Avicii landed at No. 5 with his debut studio album, “True,” which features the hit single “Wake Me Up!”

Country crooner Billy Currington rounded out the top 10 with his latest album, “We Are Tonight.”

On the digital songs chart, which measures download sales, Lorde shot to the top with her single “Royals,” selling more than 307,000 downloads in the past week. “Royals” has also been played on music-streaming service Spotify 20 million times since its release in March.

Album sales for the week ended September 22 totalled 4.5 million units, a dip of less than 1 percent from the comparable week in 2012, according to Billboard.