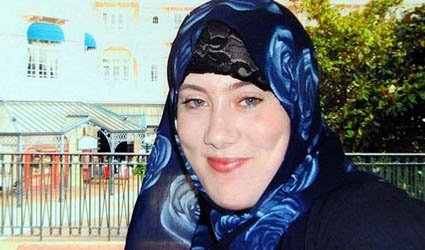 PARIS (Reuters) – Interpol issued a wanted persons alert at Kenya’s request on Thursday for Samantha Lewthwaite, a British citizen dubbed the “White Widow”, without mentioning her suspected role in the Nairobi mall attack.

The international police agency’s so-called “red alert” notice said Lewthwaite, 29, is wanted by Kenya on charges of possession of explosives and conspiracy to commit a felony dating back to December 2011.

Lewthwaite, also believed to use the alias ‘Natalie Webb’, is the widow of Germaine Lindsay, one of the Islamist bombers who carried out attacks on public transport in London in July 2005, and is thought to have left Britain several years ago.

South African Interior Minister Naledi Pandor told a news conference in Pretoria on Thursday that Lewthwaite had entered South Africa in July 2008 with an illegal passport, which she last used in February 2011.

She is wanted in connection with an alleged plot to attack luxury hotels and restaurants in Kenya.

British police have cited Lewthwaite as a possible suspect in last week’s siege of a Nairobi shopping mall by Islamists from Somalia’s al Shabaab movement.

Some witnesses said that women were among the attackers in the four-day mall attack, which killed 67 people. But al Shabaab denied on its Twitter feed using “our sisters” in its military operations.

An Interpol spokesman declined to say when Kenya lodged its request for the alert.

“Through the Interpol Red Notice, Kenyan authorities have ensured that all 190 member countries are aware of the danger posed by this woman, not just across the region but also worldwide,” Interpol Secretary Ronald Noble said in a statement.