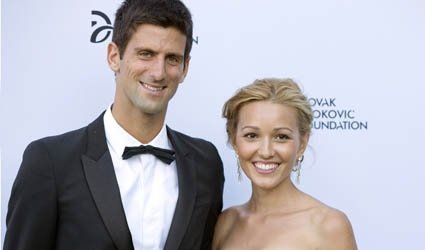 “Meet my fiance (sic) and future wife,” Djokovic, 26, said in a tweet that linked to a photo of the Serbian-born tennis star being kissed by his fiancee, also a Serb. “So happy! Thank you for the wonderful wishes #NoleFam and friends!”

Ristic is well-known to tennis fans as a fashionable and enthusiastic presence at Djokovic’s matches and is director of his charitable foundation.

Djokovic became a top-10 player on the ATP tour in 2007 but was overshadowed for several years by Roger Federer, the so-called Swiss Maestro, considered by many to be the greatest tennis player of all time, and Spaniard Rafael Nadal.

But in 2011 Djokovic surged past both men to claim the number 1 ranking by putting together one of the best seasons in the sport’s modern era, winning the Australian Open, Wimbledon and the U.S. Open and losing only six matches.

Though Federer briefly reclaimed the No. 1 spot after winning Wimbledon in 2012, Djokovic has held it for most of the past two years.

Earlier this month he lost to Nadal in the finals of the U.S. Open.

Djokovic, who credits his rise to the top of his sport in part thanks to a gluten-free diet, in August released an autobiographical book about his nutrition and training regime, titled “Serve to Win.”