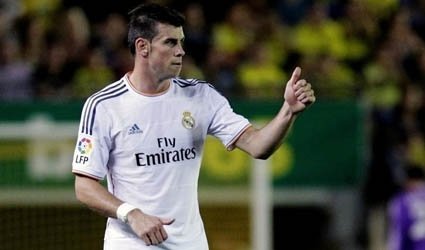 MADRID (Reuters) – With his Real side misfiring and city rivals Atletico flying high, world record signing Gareth Bale may be in for a baptism of fire when he makes his home debut in Saturday’s Madrid derby at the Bernabeu (9:00 p.m. British time).

The 100-million euro (83.9 million pounds) Wales winger was due to play his first match at Real’s giant arena last weekend against Getafe but tweaked a thigh muscle in the warmup and was hastily withdrawn from the starting lineup.

Coach Carlo Ancelotti rested Bale for Wednesday’s 2-1 win at promoted Elche, when Real needed a controversial Cristiano Ronaldo penalty deep into stoppage time to secure victory, but told reporters the 24-year-old would be back to face Atletico.

Instead of taking to the field against one of the league’s weakest teams, however, Bale will be up against a fired-up side who have won all six of their matches and top the table on a perfect 18 points with champions Barcelona.

Diego Simeone’s Atletico will also be buoyed by last season’s memorable 2-1 King’s Cup final victory against Real in the same stadium, the first victory for the club against their bitter city rivals in any competition in 14 years.

Atletico’s triumph was particularly sweet for their long-suffering fans as it left Real without major silverware and helped hasten the departure of coach Jose Mourinho.

Mourinho’s successor Ancelotti has yet to get the best from his hugely expensive squad and the Italian delivered some blunt criticism after Wednesday’s unconvincing display at Elche, a club whose entire squad is worth less than half the fee Real paid Tottenham Hotspur for Bale.

“I am not happy,” Ancelotti told a news conference after Elche snatched a 91st-minute equaliser only for Ronaldo, who had put Real ahead with a free kick in the 51st minute, to net the winner in the 96th.

“We suffered a lot, especially at the end. The team did not control the match after Ronaldo’s goal,” Ancelotti added.

“The important thing is the result but it’s not enough, we have to play better.

“Playing like that we will not win the derby … above all we have to play with more intensity and personality.”

Intensity and personality are exactly what former Argentina captain Simeone, a combative midfielder for clubs including Atletico, Sevilla, Inter Milan and Lazio, has instilled in his squad since he took over in late 2011.

None has benefited more from the Argentine’s guidance than Brazilian Diego Costa, who has started the season with a bang and tops the La Liga scoring chart alongside Barca’s World Player of the Year Lionel Messi on seven goals.

A burly forward who likes to rattle opponents with an aggressive playing style, Costa netted the equaliser in last season’s Cup final and his battle with Real’s central defenders Sergio Ramos and Pepe will be one of the most intriguing aspects of Saturday’s game.

“We are working, taking each game at a time, and the only thing that concerns us is doing things well at Atletico Madrid,” Simeone told a news conference after Tuesday’s 2-1 La Liga win at home to Osasuna.

“We are on a positive run, the fans are happy.

“Each day the responsibility is growing and the demands even more and that’s why we have to rest properly and train hard.”

Barca’s Argentine coach Gerardo Martino is likely to continue his policy of alternating rest days for key squad members when the champions play at promoted Almeria on Saturday.

In-form Spain playmaker Cesc Fabregas is likely to start after sitting out Tuesday’s 4-1 success at home to Real Sociedad.