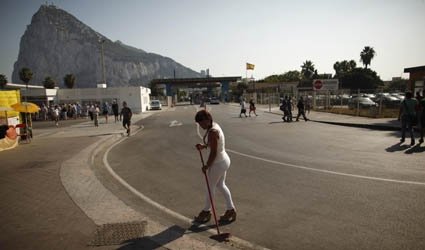 BUENOS AIRES (Reuters) – Argentina and Spain agreed on Thursday to team up to pressure Britain to discuss their separate claims on British territories: the Falklands in the south Atlantic and Gibraltar near the southern tip of Spain.

“They discussed the common ground regarding sovereignty disputes over the Falklands and Gibraltar,” it said in a statement.

“They agreed on joint measures to press Great Britain to comply with the mandate from the United Nations to dialogue,” it said.

Argentina and Spain have been at odds since last year after Argentine President Cristina Fernandez nationalized YPF oil company, which was a unit of Spain’s Repsol.

But the two countries have a history of solidarity over Gibraltar and the Falklands, known to the Argentines as the Malvinas Islands.

London rejected last month a Spanish proposal for bilateral talks on Gibraltar, a rocky Mediterranean outpost that Spain ceded to Britain 300 years ago.

Britain says it will respect the wishes of Gibraltar’s 30,000 people, who have repeatedly stated they want to remain British. Similarly, London has said it will not discuss sovereignty of the Falklands without including the islanders.

Gibraltar and the Falklands are on a U.N. list of non-self-governing territories that are subject to a process of decolonization.

However, the U.N. also recognizes that the United Kingdom and Argentina dispute the sovereignty of the Falklands, which have been under British control since 1833.

Argentina and Britain went to war over the islands in 1982, a conflict that Argentina lost.

Tensions in Spain and Britain over Gibraltar escalated this summer in a spat over fishing rights and border controls.